It’s never the technology that’s important. It’s the market and economic forces driving it that matter the most

Newspaper companies have been overwhelmed by the Internet, but they are not alone. All business, all categories, all channels of distribution and communication have been affected, so much so that it is almost impossible now to recall life without it. There is much for any business to learn about change and risk management from the early days of the digital revolution but one lesson is paramount: Bullshit is the grease upon which new technology slides into the future.

Bullshit is the primary symptom of digital mania, a malady that spreads like the Spanish flu whenever a new technology begins to take hold and take off. Those afflicted act a lot like people in the first stages of love. Seduced and smitten, they’re blind to the obvious, act contrary to experience and wildly exaggerate the future possibilities. That’s why an emerging technology is always going to change the world. Upend an established way of doing business. Change consumer behavior forever. And be the next Google.

It’s hard to keep your head when all around you are losing theirs. Compared to previous media like radio and television, the sheer speed of consumer market penetration of the Internet was enough to set off an outbreak of irrational exuberance. It had taken radio 38 years to get to 50 million listeners. Broadcast television took 10 years to get to 50 million viewers. How long did it take the Internet to achieve 50 million users? Just five years. 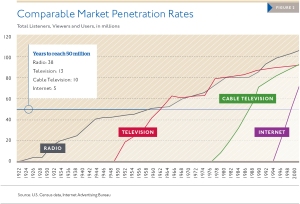 When any technology or application grows with this kind of velocity, the tendency is always to over-estimate its impact at the start, then to over-correct and miss the long term effect. So when the Dotcom Bubble burst on April Fool’s Day of 2000, commentators and analysts who had previously led the cheers turned around and piled on with the same surety. They had been vulnerable to the inflated, self-perpetuating projections of the hype. The same flaw made them vulnerable to the doomsday, self-righteous preaching of the bust.

The hard times were the inevitable outcome of giddy excess and gambling, they said. It was little different from the 17th century speculation in tulip bulbs that had bedeviled Holland. They were so busy moralizing they didn’t see that Tulipmania laid the groundwork for an industry that today exports nine billion bulbs a year and employs 250,000 people. That’s the thing about irrational exuberance. It masks an underlying revolution.

Bubbles drive most of the action on the aggregate stock market every day, it’s the nature of the beast. But when they over-inflate, they breed chaos. Yet from chaos comes progress, so the occasional big-bang equity bubble is really not all bad. It can be painful, but then progress often is. The Renaissance was born in Italy because 14th century Italian society was riddled with revolution and disorder. The Swiss have had peace and tranquility for a thousand years and their most creative contribution to the world is the cuckoo clock. The best thing about big bubbles is that they inevitably lay bare both real value and duplicitous value for all to see. The real new businesses hunker down through the bust. They focus even harder, they learn, they bob and weave and make adjustments, and they emerge stronger and more dominant. Just like Amazon.

Any bubble will burst. Keeping perspective, identifying and reflecting upon the underlying market drivers and evaluating them dispassionately, studying customers and figuring out how to provide them with new forms of value, these change management skills should be deeply embedded and constantly refreshed internal competencies. They lie at the heart of a fluid strategic process. If they’re in place, then any company can take advantage of developments in technology without risking the farm or chasing a pipedream.

The threat to newspapers – to all traditional media – was never Internet technology. Rather, it was the market and economic forces that lay behind it. Since advertising began, advertisers have been driven by a search for advertising efficiency. Television invented grand tales of audiences segmented by programming demographics to accommodate them. But true ad efficiency comes from the ability to target an advertising message and measure response to it. That’s what drove the growth of direct mail – and the Internet is direct mail on steroids.

Peter is a traditional media veteran and a digital media pioneer. He is an active angel investor and occasional consultant. He advises established companies on cultural regeneration and also consults to digital start-ups, helping them incorporate management process without sacrificing speed. He holds five technology patents. Peter is an award-winning public speaker and writer. His new book, "The Cannibal in the Room," will be published soon — it is the ultimate insider account of the battle to find a digital future for newspapers when the Internet came to town. He blogs on media and leadership here at blastofwinter.com and publishes his unconventional ideas about management on his LinkedIn page: https://www.linkedin.com/in/peter-winter-92b69033/ His collection of short stories can be found at medium.com/peter-winters-life-of-fiction

Check out our LinkedIn page